This Much Is True: An Evening of StoryTelling on March 14th

This Much Is True is one of the longest running storytelling shows in Chicago, IL. Every month, we come together in the cozy upstairs lounge of one of the city’s finest pubs for an evening of true personal stories from some of Chicago’s most fascinating people. An all new cast takes the stage each month to let you in on the heartbreaking, the hilarious, and everything in between.

Past guests have included writers, actors, chefs, theologians, SNL alums, musicians, bloggers, activists, professional storytellers, comedians, and more from our city and around the world.

Join us on March 14th for an evening of personal tales reflecting upon identity, heritage, empowerment, and immigration.

About the Producer and Host 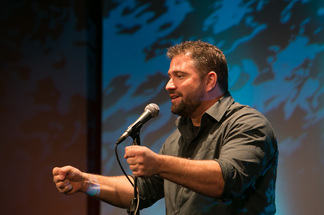 Scott Whitehair is the producer and host of This Much Is True. He is an international storyteller, producer, and instructor living in Chicago, IL. He is also the creator of Story Lab Chicago, which has put over 350 new storytellers on stage since 2011, and director of Do Not Submit, a grassroots series of free story open mics across Chicago. Scott has appeared on stages all over the world, and has been featured on NPR, Risk! Podcast, Sirius XM, among others. He is a 2x Moth Slam winner, is on the board of directors for The National Storytelling Network, and was the featured instructor at Hong Kong Story Worthy Week 2014, headlined by David Sedaris. His monthly personal narrative class has been selling out since 2012, and his coaching and training is in demand in the corporate and non-profit world. For more information on Scott, his classes, or training, please visit his website.