Malika MacDonald Rushdan is Irish-American and the National Director of ICNA Relief USA’s Women’s Shelter Network. She was awarded the prestigious U.S. Senator John F. Kerry Leadership award and earned a fellowship at Harvard University’s Kennedy School of Government. While with ICNA Relief she has developed a successful women’s transitional housing model, opening the firstt facility in 2008 in Jamaica, NY. Today, she oversees 13 facilities housing homeless women. Malika is a strong advocate for abused women and provides workshops and community trainings on healthy relationships. She is married and has four children and eight grandchildren. She embraced Islam in 1995. The original article was published in Patheos.

Through a matching grant from Gates Foundation on MALA’s GlobalGiving platform, these stories are produced by Writers Studio to promote the diverse narratives of Muslim Americans, spotlight individuality, show our shared humanity and further the impact of our voices and concerns.

Do you remember the hadith of the prostitute who obtained paradise just by providing water to a thirsty dog? Yet, more often than not, we look down upon those who may seem beneath us. As the National Director of ICNA Relief USA’s Women’s Shelter Network, I want to share with you the story of one such woman, a tale that is sadly far from unique.

Let’s call her M.  She was born to an unwed teenage mom, who herself was the child of alcoholic parents. When her mother married, little M came to be raised by a seemingly loving step-father. That was until adolescence, when her step-father began taking special interest in her.

Forced into a physical relationship by a father-figure, she would carry the trauma into her adult years. Not understanding the horrors she faced at night after her mother drifted off to sleep, M began to rebel. To cope with the abuse, to numb the pain, drugs and alcohol became her escape.

One explosive evening, unable to endure her step-father’s advances any longer, M pleaded with her unknowing mother for help. To her credit, her mother believed M. Her mother threw the man out and got divorced, but the abuse was never spoken of again. The young girl received neither counseling nor sympathy from her mother.

Instead, M’s mother turned to alcohol and drugs herself, doing lines of cocaine at the kitchen table. And, in time, she turned all her rage on M, even blaming her for the sexual abuse. She ranted that if abortions were legal, M would have never been born. Looking for love, young M slipped from one unhealthy relationship to another.

By 15, her mother kicked her out. She was now homeless.

When M met an older man, a popular DJ in a club with access to the best parties and the best drugs, she embraced the high life. It was a life of glamour and glitz on the arm of a kingpin who was more concerned with his image than her well-being. Whenever she did or said something displeasing to him, he would beat her into submission.

A high-school dropout and unable to return home, at the age of 17 M found herself pregnant. Seeing that she couldn’t keep up with the party lifestyle, her boyfriend grew increasingly violent. However, typical of most abusers, he would then apologize with lavish gifts and empty promises.

Caught in a vicious cycle, M married her abuser at the age of 18. Baby number two followed.  All the while, she was ridiculed on a daily basis, stripped of her dignity and self-esteem, broken as her husband continued to abuse her with punches and kicks, bruises and even broken bones. Yet, it was the verbal abuse which broke her spirit the most. Told repeatedly that she was no good, fat, and ugly, that no one else would ever want her, her husband flitted from one extramarital affair to another.

One night he called, slurring that he was on his way home to kill her. Not waiting for what she believed to be true, she fled with her children in the middle of the night, sleeping in her car overnight, escaping to a shelter home the following morning.

At 21, she was a young woman who had faced a lifetime of abuse; physical, verbal, emotional and psychological — conditioned to accept unhealthy behavior as the norm, not knowing any different. For years she drank heavily to run from the pain, never questioning the trauma she had experienced.

Seeking help wasn’t even on her radar. She was just trying to survive, yet was dead on the inside. The next 10 years were lost in an on-again, off-again relationship with a drug addict with whom she had two more children.

In an effort to provide for her children, she took one seedy job after another working as a waitress in an adult entertainment establishment. Lost in a sub-culture of immorality, she lived surrounded by hookers and pimps, drug dealers and thugs.

In the back of her mind she knew there had to be a better way, yet she was trapped by her own insecurities. Drowning in self-pity, she didn’t even know how to break free. It was when her son received third-degree burns in an unfortunate accident that she was forced to take a deeper look at her life. She wanted more for her children. It was the unselfish love of a mother that forced her to seek change.

M got involved at a local community center to earn her high school diploma and began working with a mentor, a woman who saw great potential in her though M herself was blind to it. The mentor pushed her to new levels, challenging her strengths as she raised the bar each time. Slowly, M began to believe in herself, believe that change was possible.

However, there was something still missing. M started searching for a sense of belonging, for inner peace. First, she went back to the Catholic Church in which she was raised.  She also visited a Buddhist temple, a Sikh Gurdwara and a Baptist church yet each time she left, unfulfilled.

Coincidentally her mentor, though not a Muslim, gave her a copy of Autobiography of Malcolm X. The story of Br Malcolm’s own transformation from a street thug to an exceptional world renowned leader proved to be the spark M had been looking for.  Nervously, M visited a mosque for the first time where she was given a book Islam in Focus. Reading it was like an epiphany — all the questions she had about religion were being answered.

She returned to the mosque shortly after and upon hearing the adhan (call to prayer) for the very first time, she broke down weeping. It was almost like a release from all the pain. In 1995, M took shahada (profession of faith as a Muslim). This is when her life began to change.

M began to heal as she developed a one-on-one relationship with her Creator. SubhanAllah! Allah is so merciful. Islam restored her dignity and comforted her with the peace she ached for. When she adopted the hijab, she was forced to value herself and to develop her intelligence. It was through Islam that she found herself. 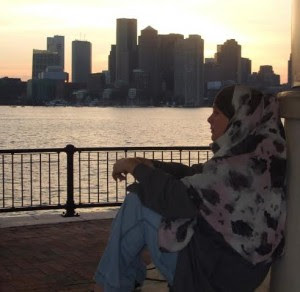 She went on to receive her high school diploma, working with the very same mentor. She was soon gainfully employed in a respectable position, working with other young women who faced similar challenges. Later, she was accepted into Harvard University’s Kennedy School of Government where she studied community development. She has since gone on to be a champion for women, a public speaker of repute.

How do I know this story so well? This woman is me. I am M … Malika.

Why is this the story I wanted to share? The first is so we learn never to underestimate the transformative power of a one-on-one relationship with Allah. Any time is a good time to develop that relationship. Secondly, as I mentioned, we often dismiss those who don’t meet our own standards rather than showing them love and mercy, the hallmarks of Islam.

We may even re-victimize a victim by shunning her when she doesn’t fit our ideal image of a ‘good person’ or a happy, outgoing individual. If we are to change a few things about ourselves, let us learn to stop dismissing people and learn to withhold judgment — judgement is for Allah alone.

As the National Director of ICNA Relief’s (www.icnarelief.org) Women’s Shelter Network , many of our clients are victims of abuse and neglect, war and trauma or have suffered from addiction. Their lives have become unmanageable for no fault of their own.  Many of the women who walk through ICNA Relief’s doors are taking the first step towards healing.

However, that healing process is long and difficult, and extremely difficult and painful for some. Many are learning to live again.

My work allows me the opportunity to, Inshallah (God willing), inspire and foster hope where there is none. Similar to that of a caterpillar becoming a magnificent butterfly, I get to witness all of the transformational stages women go through during their own metamorphosis.  But their healing is easier when the rest of us obey His decree.